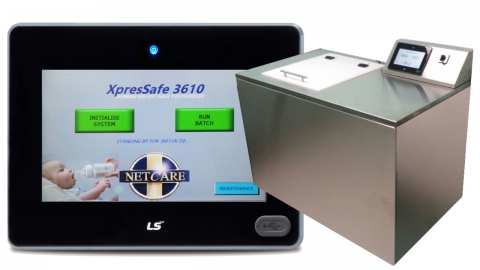 Temperature control with a user-friendly interface.

When it comes to Neonatal Nutrition there has been a move for some years to donate expressed milk to infants who are not able to be fed by their own mothers.

The snag is that due to the possibility of infection in the infants a pressing need was created to pasteurise the milk.

This is not as easy to do as one would think. Simply popping the bottle into warm water or a pot would either overheat the milk or have no effect at all.

The NetCare group approached Cozatec to build a machine that would pasteurise the milk to the correct temperature and time for this process. This led to the development of Cozatec’s “XpresSafe 3610”.

Large batches at a time would have to be processed to produce consistently good quality milk, without scorching or spoiling the product.

The first step was to develop the hardware by creating a heating and cooling process with efficiency that would suit the sterile conditions in hospitals. Once the XpresSafe started to take shape, the controls needed to be considered.

After extensive research and consultation, Cozatec decided to opt for the LSIS HMI and PLC, equipped with temperature control analogue modules. The XpresSafe would utilise the LS eXP40TTA HMi, the XEC-DR30SU PLC, the XBO-RD01A RTD input module and the XBO-TC02A dual thermocouple module.

With this relatively inexpensive kit, the XpresSafe accurately controls the pasteurisation time and temperature.

Accurate tracing was required of every process from start to finish.

Using the eXP40TTA’s built-in Ethernet port, the process is exported to a Linux server developed by Cozatec, which is readily viewed in a spreadsheet application such as Open Office.

Rafe Nussey and Charles Kerr who are affiliated to Cozatec built and integrated the machine and were delighted with the system of choice. Nussey commented on the LSIS control system: “We found building an interface with the XGT HMI panel ridiculously simple with its built-in modular functionality, while the XEC PLC was a pleasure to work with, catering as it did to every developers’ need with solid debugging info, also allowing live manipulation of logic and PID parameters.”

The XpresSafe 3610 is a ground-breaking machine which will ensure the health and safety of new-born babies consuming pasteurised, expressed mother’s milk in Netcare hospitals.