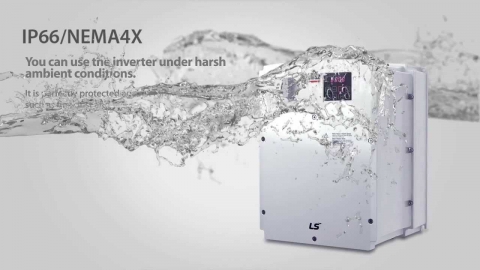 When it comes to harsh environmental conditions there are few options readily available such as the LSIS-S100-IP66 which is already in use in the agricultural sector for pivot irrigation systems in South Africa.

LSIS Industrial Systems are known for a diversity of Inverters that are from general purpose drive to Elevation, Heavy duty drives, HVAC specific drives and Medium Voltage drives. In the Low Voltage segment there is a choice of no less than 8 different models of inverters to suit exacting purposes with pricing to suit the application. Apart for the newest addition, the LSIS-H100 HVAC and pump drive recently featured in this magazine, there is the LSIS-S100 which forms part of a new generation of drives by LSIS.

The S100 is packed with size saving technology making it up to 40% smaller than its predecessor the LSIS-iG5A with a reduction of Side-by-Side installation from 50mm for the iG5A to 2mm with the S100.

It is thus with pride that LS Industrial Systems launched the S100-IP66 satisfying the NEMA standard type X4 and IEC 60529 IP66 standard. This drive is available in 200/400V from 0.4kw-22kw. This water and dust proof inverter is primarily aimed at the Food and Beverage environments but is as applicable to high humidity or dust environments such as sumps and crusher plants and the like.

With its highly visible new generation embedded LCD and tactile keypad, setting parameters, monitoring motor RPM, current and other settings are easily done with a user friendly layout. A rotatable isolator is built into the drive allowing one to shut the motor and drive down when and as needed.

Cooling is always a consideration with inverters and the S100-IP66 has the usual heatsink and external cooling fan/s and for additional internal cooling of the PCB’s and Capacitors a circulation fan is built into the drive. Operation temperatures are in the range of -10 to 50°C and with heavy duty application up to 40°C.

This fully specced inverter is also cost effective, a space saver without the added costs of enclosures and without the worry of having water or dust dampen your production.  Instrumentation & Control